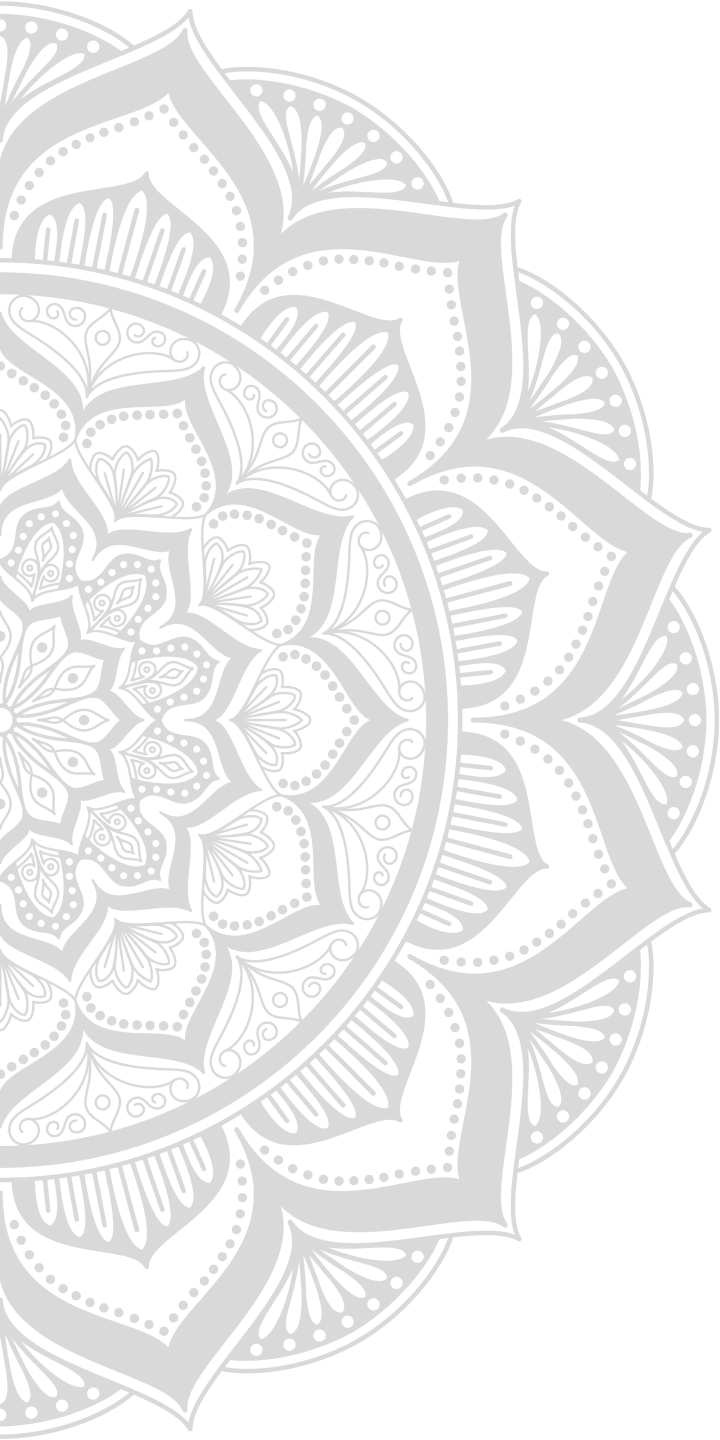 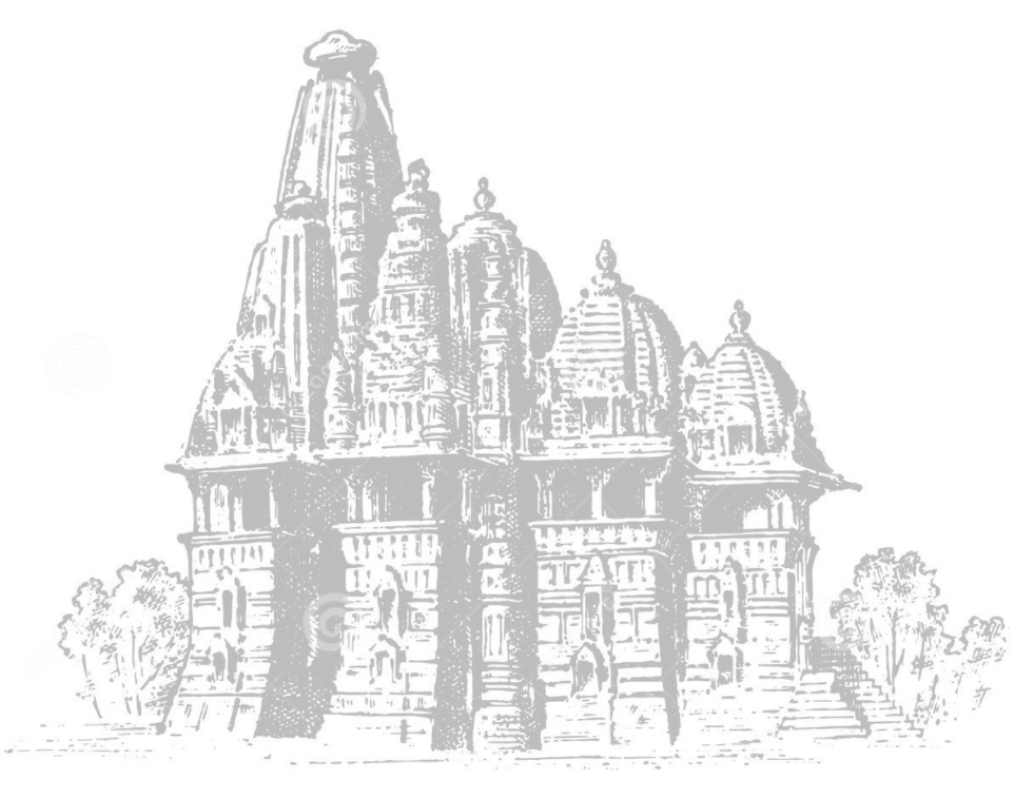 Anand Sai envisioned this temple in a few moments of spiritual clarity. Over a period of the next few months, every morning, Anand would sketch out smaller parts of this temple to maximum detail. The first time he presented his vision to the CM of Telangana - he was bowled over by the clarity of thought, the detail, and the fact that despite seeing multiple people pitch the temple’s design - absolutely no one else had been so grounded and elegant.

The Yadadri Temple is Anand Sai’s life’s work - life’s love! He did it for the love of period architecture, his spirituality, and to help the temple town’s economy thrive. This temple will keep the artisans home’s filled with joy, to help their work make a mark on the world, and for the art to stay alive for a long time to come. 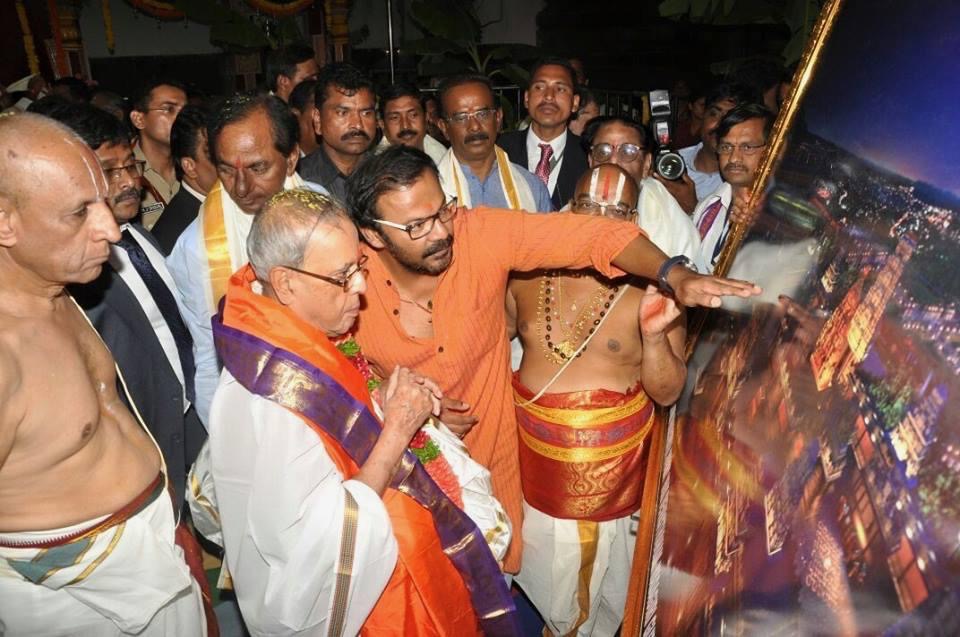 "Anand explaining the temple masterplan to Former President Pranab Mukherjee at Yadagirigutta in 2015".

Yadadri at a glance 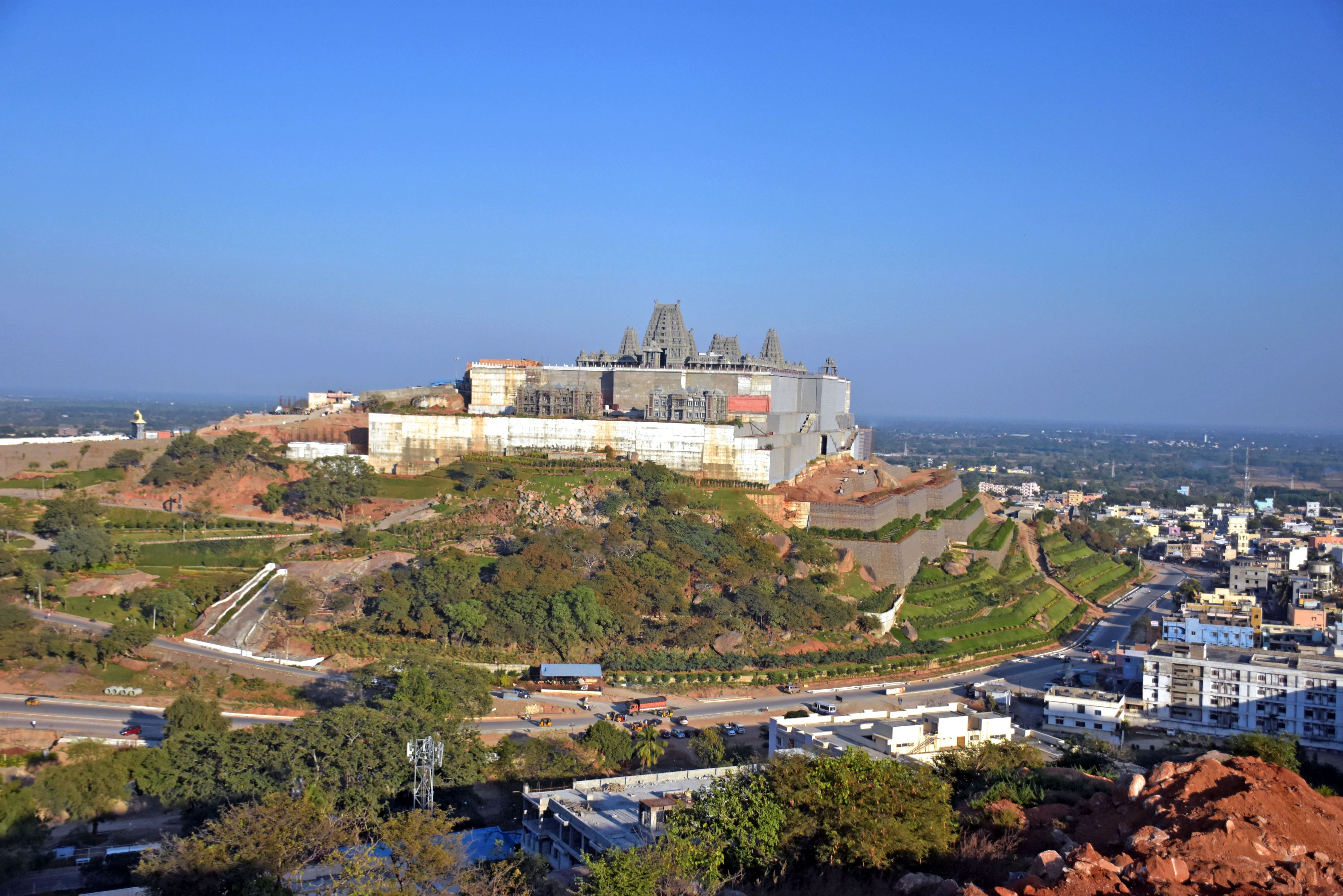 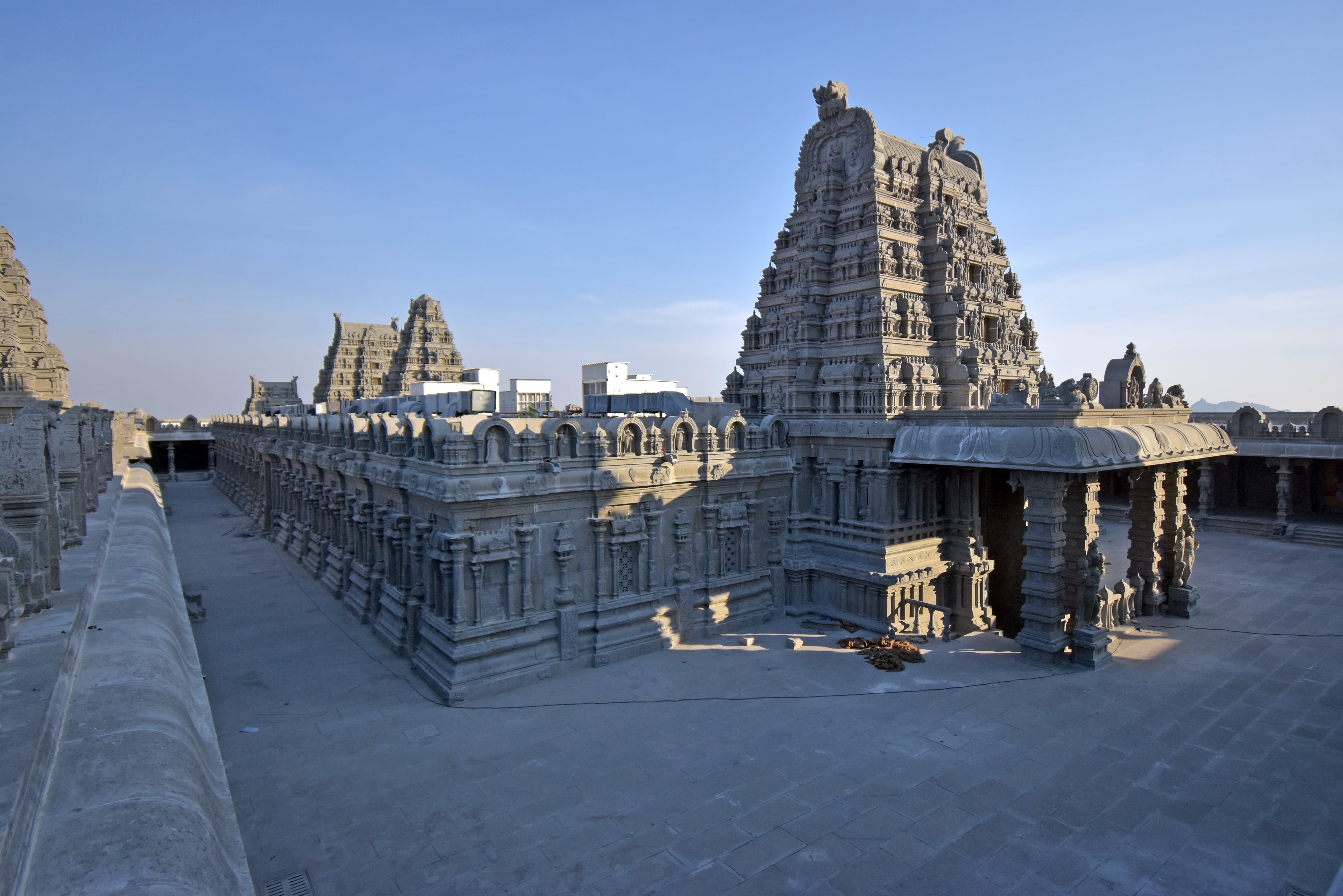 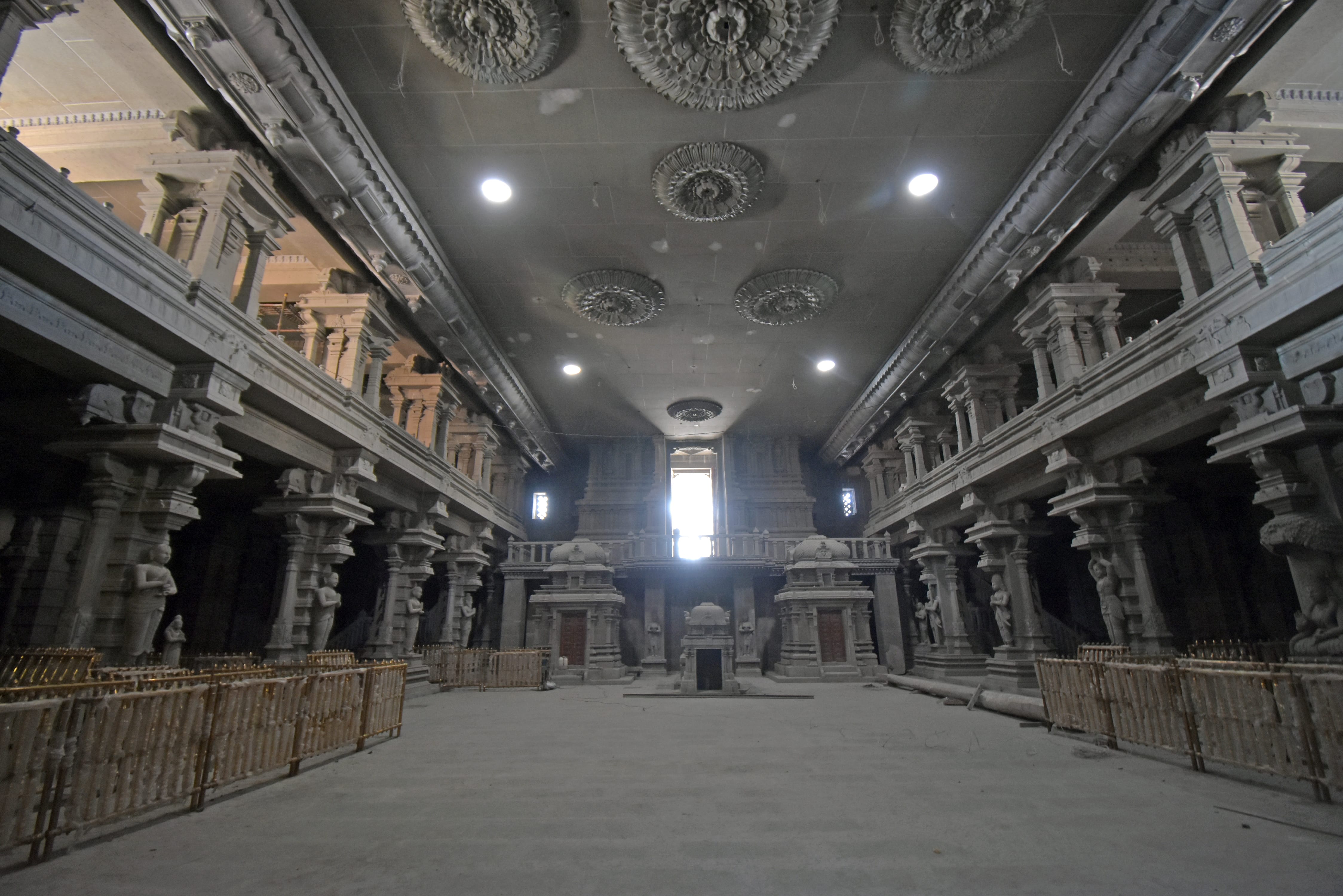 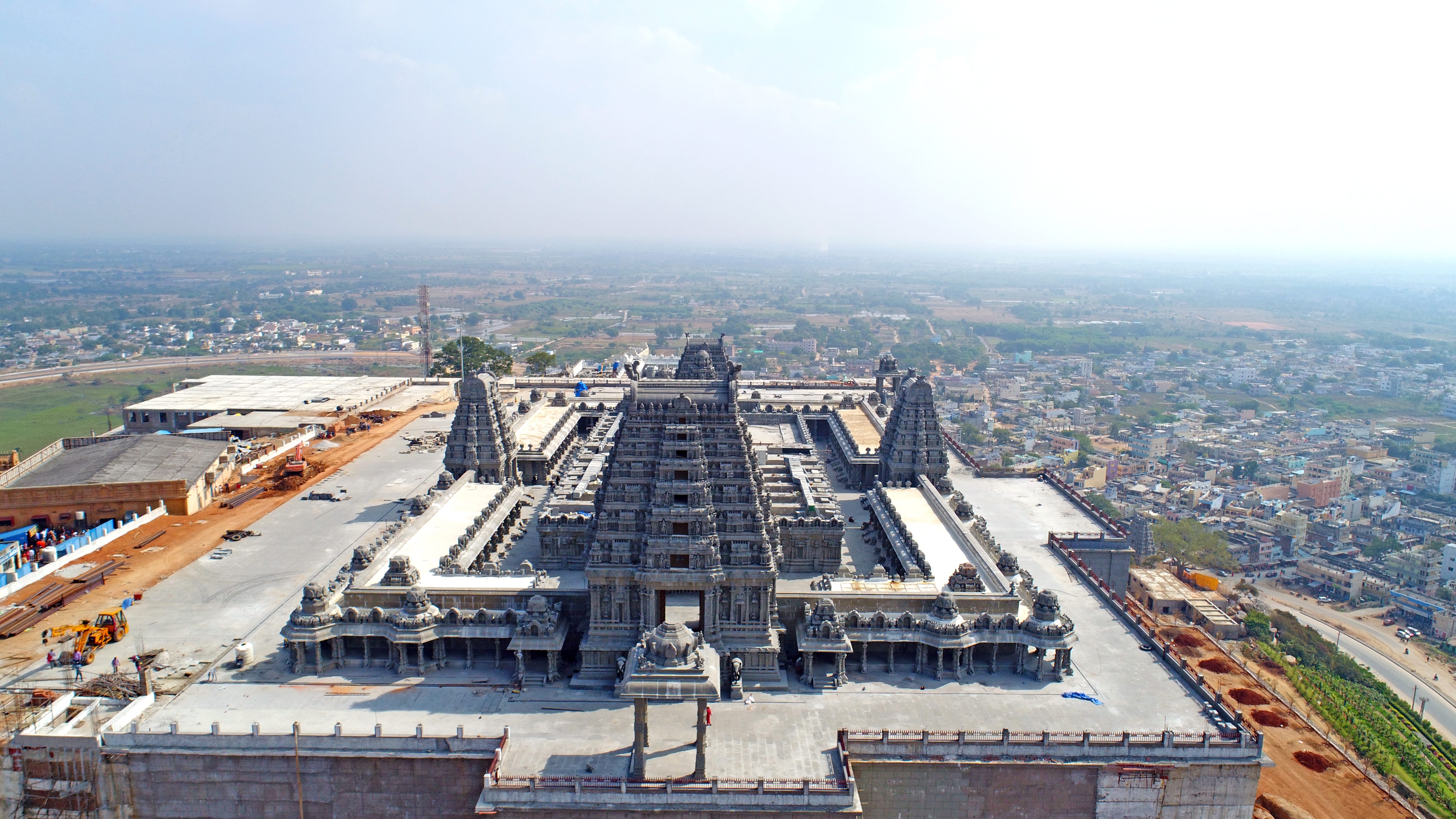 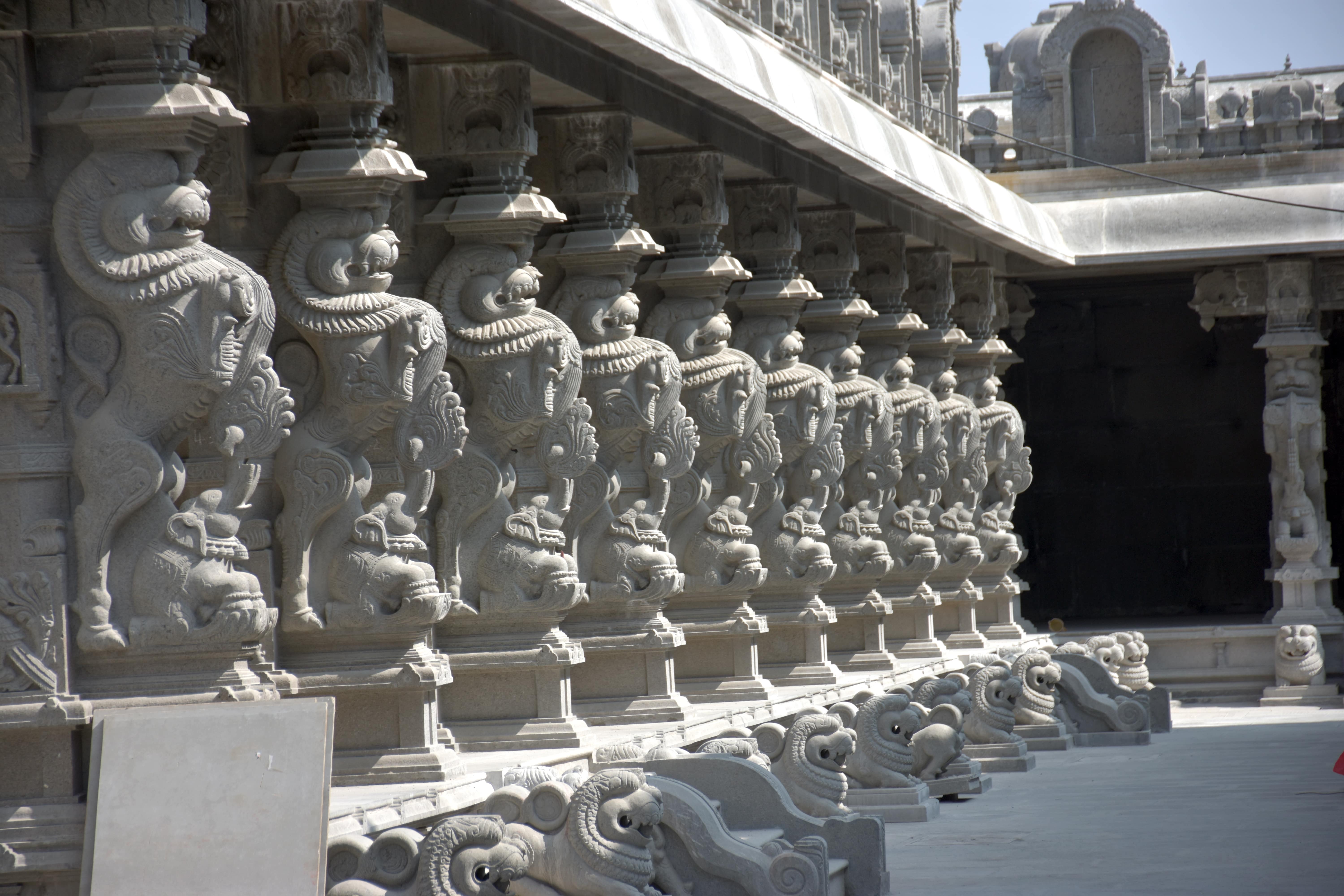 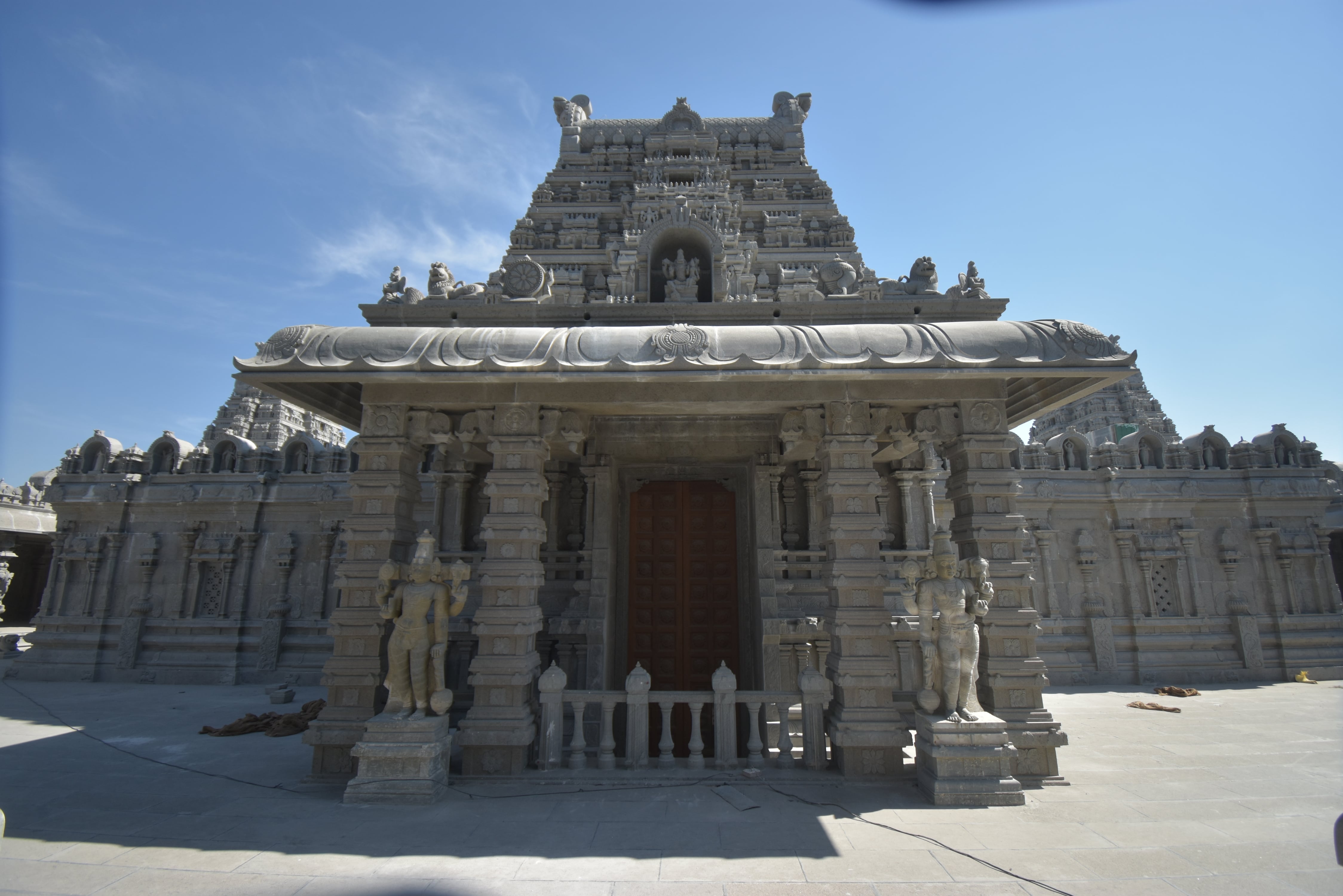 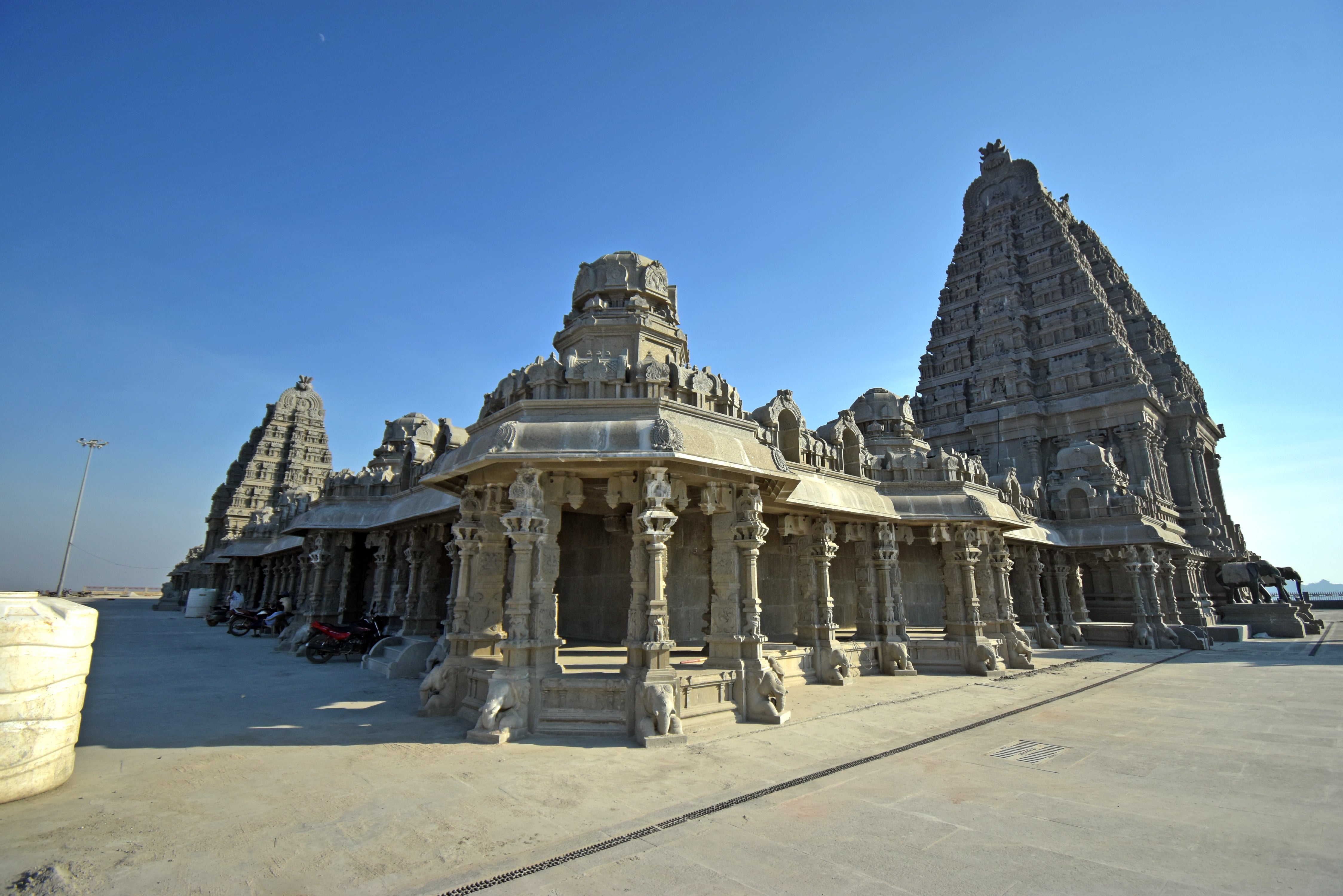 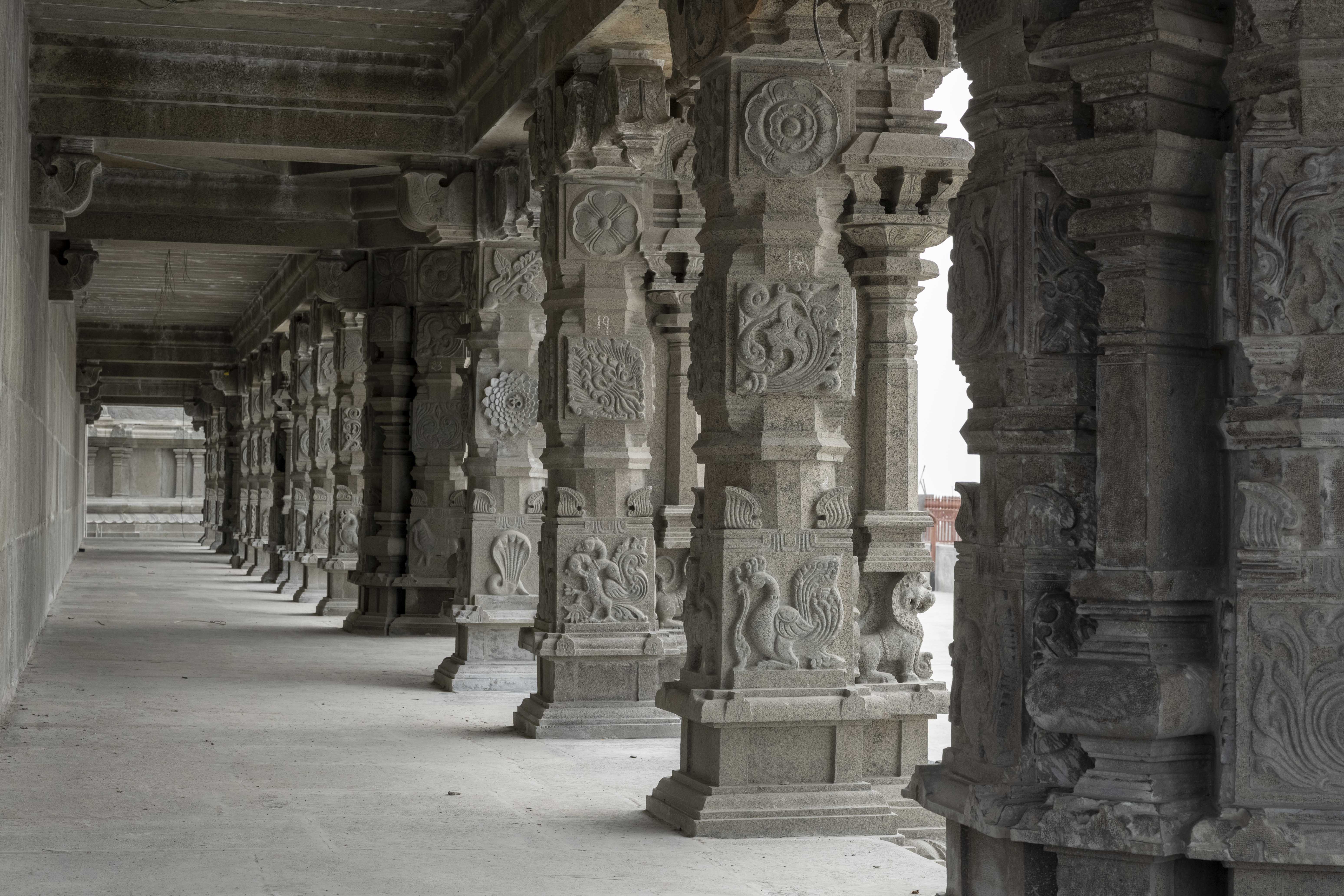 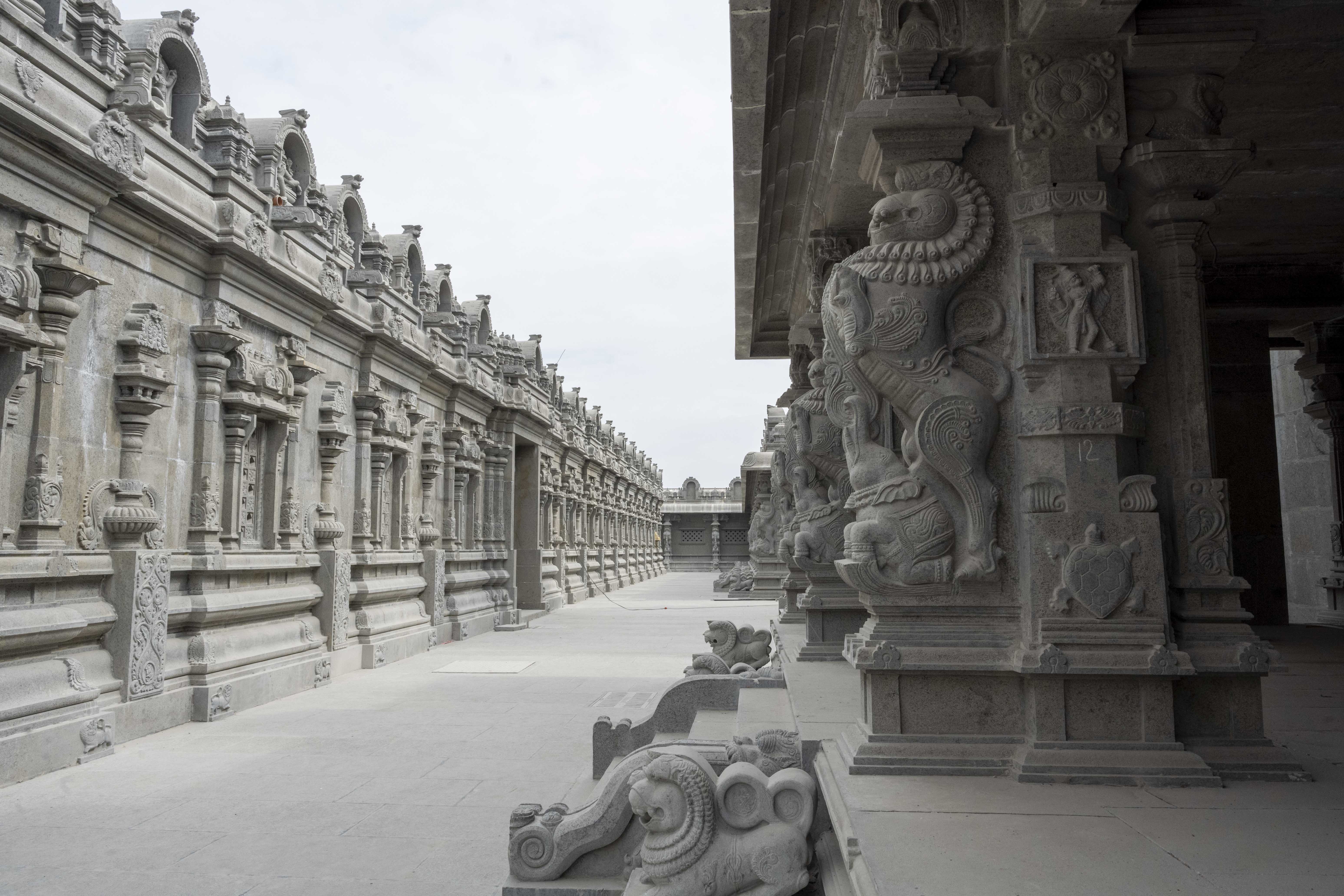 Yadagirigutta (named after Yada Maharshi), is also known as Sri Lakshmi Narasimha Swamy Temple or Yadadri Temple, is a Hindu temple situated in Nalgonda district, Telangana, India. The temple is also known as Rishi Aradhana Kshetra or the place of worship for saints. The Aradhana and Puja are performed in the temple according to Pancharatra Aagama.
‍
The Government of Telangana under the guidance of the Hon’ble CM Chandrasekhar Rao, has taken up the project of developing the divine shrine of yadadri and its surrounding areas. It includes the main temple renovation with more architectural features and forms, and also the areas in and around the temple hillock (spread on an area of 14.0 Acres) and downhill (spread on an area of 47.0 Acres). 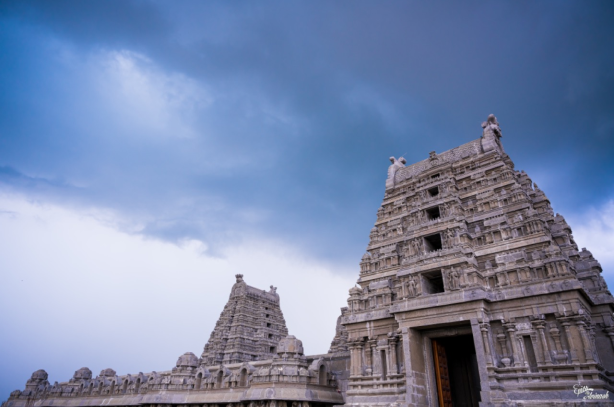 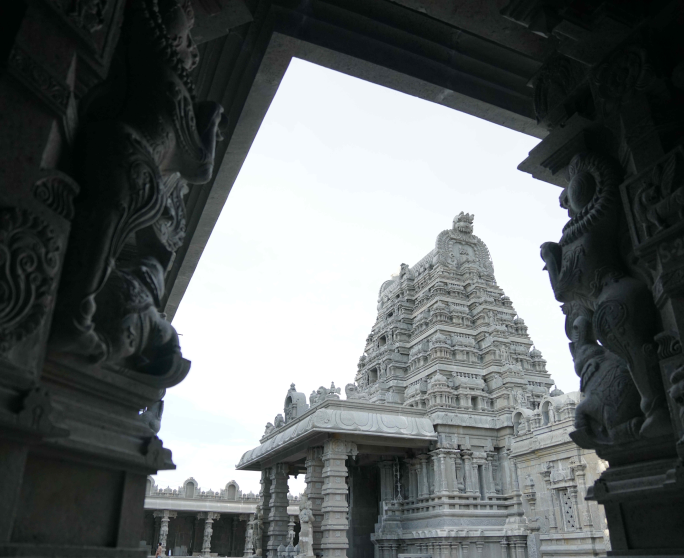 Glowing bright atop the sikharam of the garbhagriha (Sanctum Sanctorum) of this cave temple is the golden Sudarshana Chakra (about 3 ft x 3ft) of Lord Vishnu (who is a reincarnation of Lord Narasimha), the adornment as well as the weapon is a symbol that this temple is identified by from as far away as 6 km. The temple complex is proposed with an element of identity, with a magnificent lion faced Arch entry gate which characterizes the Lord Narasimha swamy. The shrine is approximately 262’-5” above ground level and the climb up there can be quite strenuous.

Anand has included all eras of magnificent architectural styles in this temple: Dravidian Era,  Vijayanagara Empire, Kakatiya Period, Pallava Rule, and Chola Era. Elements like pillars, mukhamanadapam, saalahaaram, vimaanam, mandapams from these various eras have inspired Anand in his process to create the temple. Not just that - he’s ensured that every little detail adheres to the Aagama Shastras. This temple stands out for the stone erection right from the basement which is also called upaanaadhi, till the top of the gopuram and the stoopi. This temple is one of it’s kind in the country to have the entire structure done basis the Krishnasila. 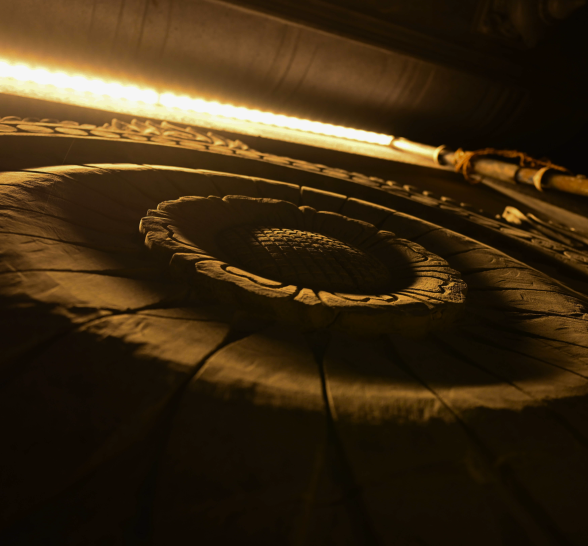 The Main Temple has six main areas and the Brahmothsavam space has four main areas. Each one has been designed by Anand Sai keeping the shastras in mind, all while focusing on making it so magnificent, that it would be hard to forget. Let’s take a quick tour of the main temple:

The sanctorum is where the deity of Lord Lakshmi Narasimha Swamy self-manifested remains unaltered. The aayadi of the garbhalayam is done as per shastras.
‍
The manasutram of garbhalayam is 812 Sq Ft above which the vimana gopuram sits and weighs up to 1500 Tonnes . It’s restricted only to a 16 storied structure according to the Aagama Shastra. Hence, Anand adapted to a five storied structure made entirely of stone and is adorned with gold - helping it stand out and marking the significance of the Vimaanam. In the addition, Vaishnava Moorthis shall be sculpted on this gopuram. The palatial structure is decorated with small vigrahams between each layer of the gopuram. The pyramid structure of the gopuram depicts the resplendent Dravidian style of architecture. 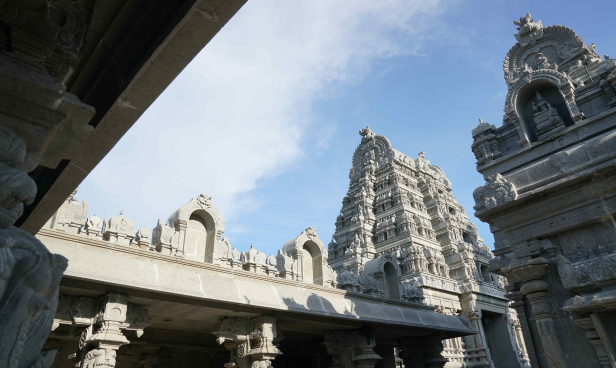 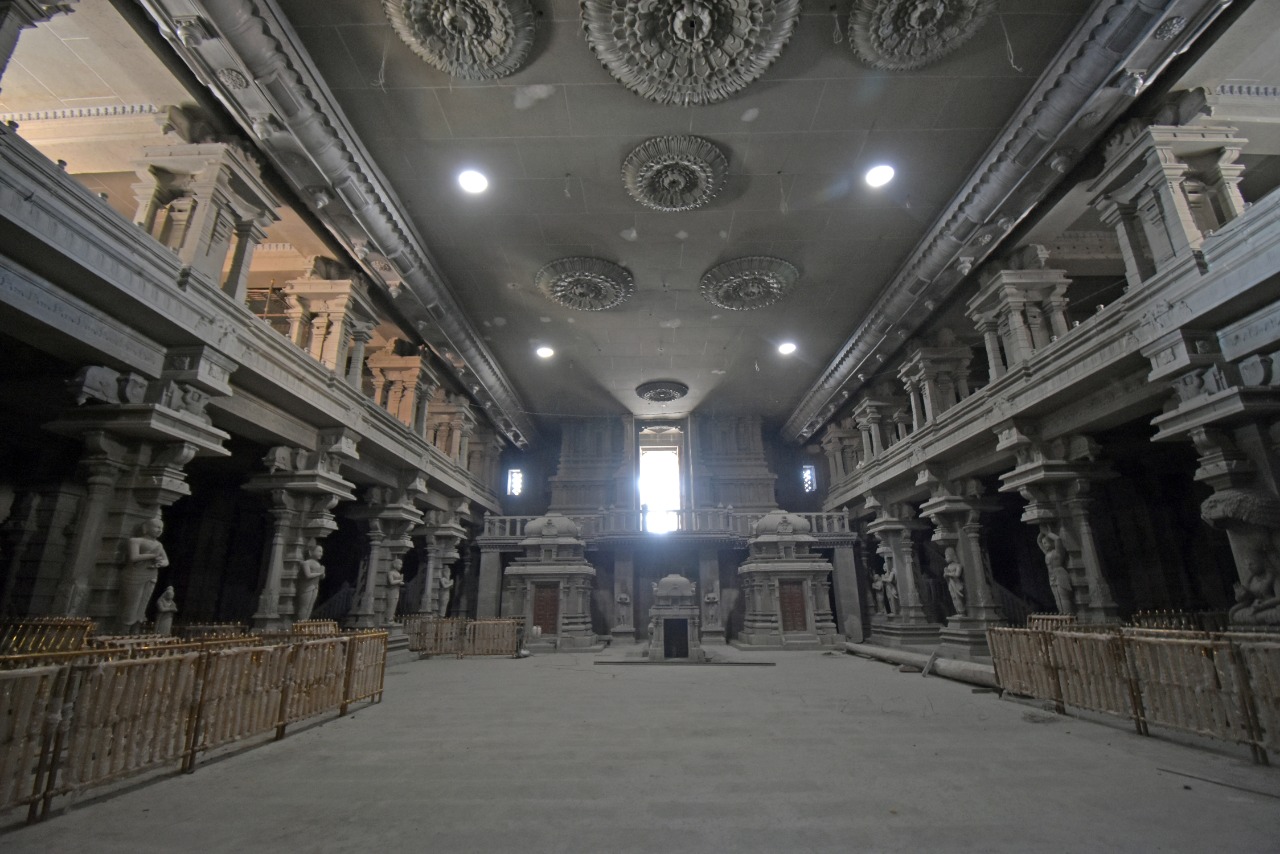 Significance of the Alwars:
‍
Sri Vaishnavism is one of the pre-eminent traditions of Hinduism. An unbroken lineage of teacher (the Acharyas) and a wealth of literature in Tamil and Sanskrit. These Alwars are 12 in Number and out of which one is Sri Andal, who is a woman. These Alwars were born in various parts of our country but they were all united in a common subject, in dedicating their lives and praising the Lord.
‍
The great Alwars lived their lives dedicated to expressing their devotion to MahaVishnu - considered to be the supreme manifestation of Divinity in the Vaishnava system of beliefs.. Hence, they are considered as spiritual gurus for the Vaishnava cult and are placed in every Vaishnava temple.

The Garbhagudi and the Mukhamandapam are enveloped with the First Prakaram wall that’s built with stone work as per the Aagama Shastra. The external side of the first prakaram wall is adorned with intricate ornamental stone works with Salaharam, Deva Kostams, Jalakams and Vigrahams. It has Trithala Gopuram on the northeast corner. Chitrakanta Pillars are embossed on the Praakaram wall to add a royal touch. A Panchathala Rajagopuram with ornamental stone work is built on the west side giving it a lavish and rich look. 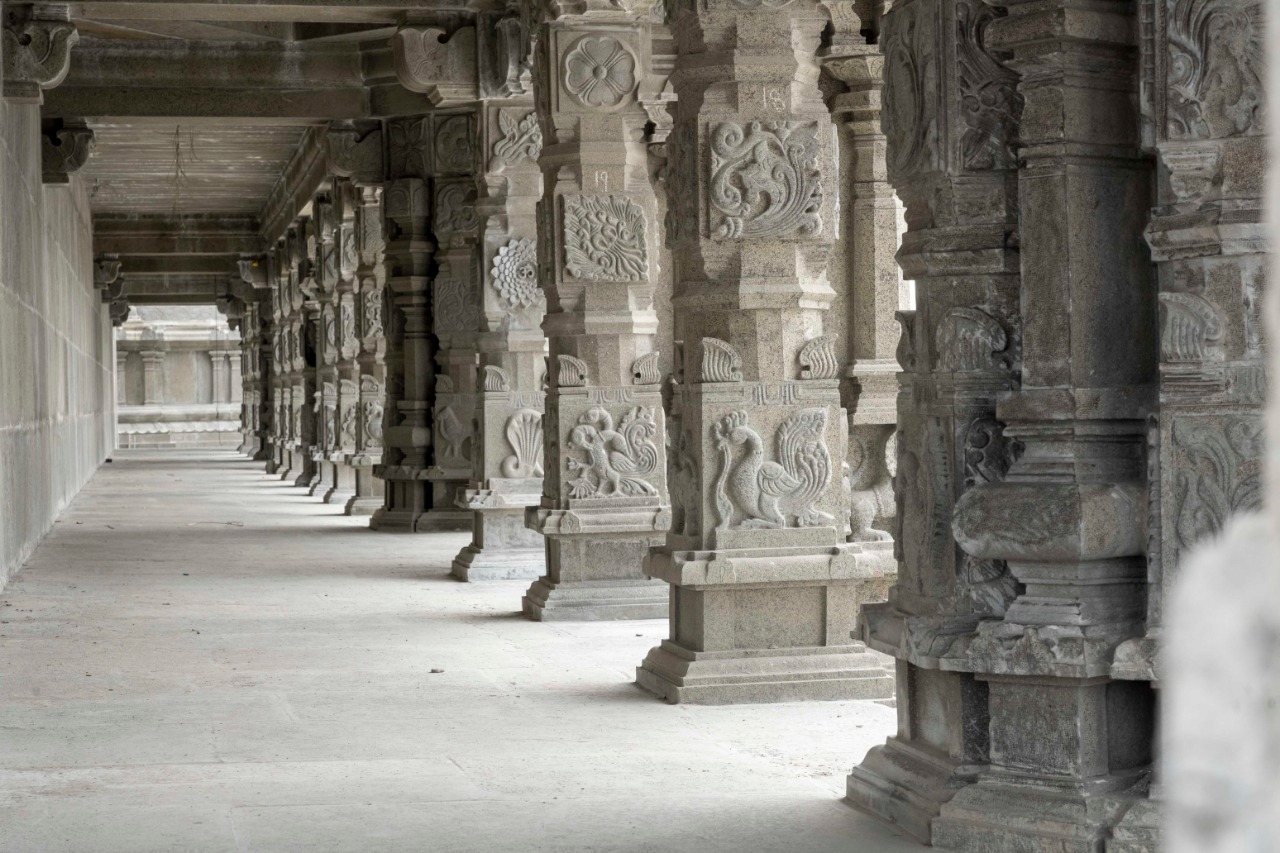 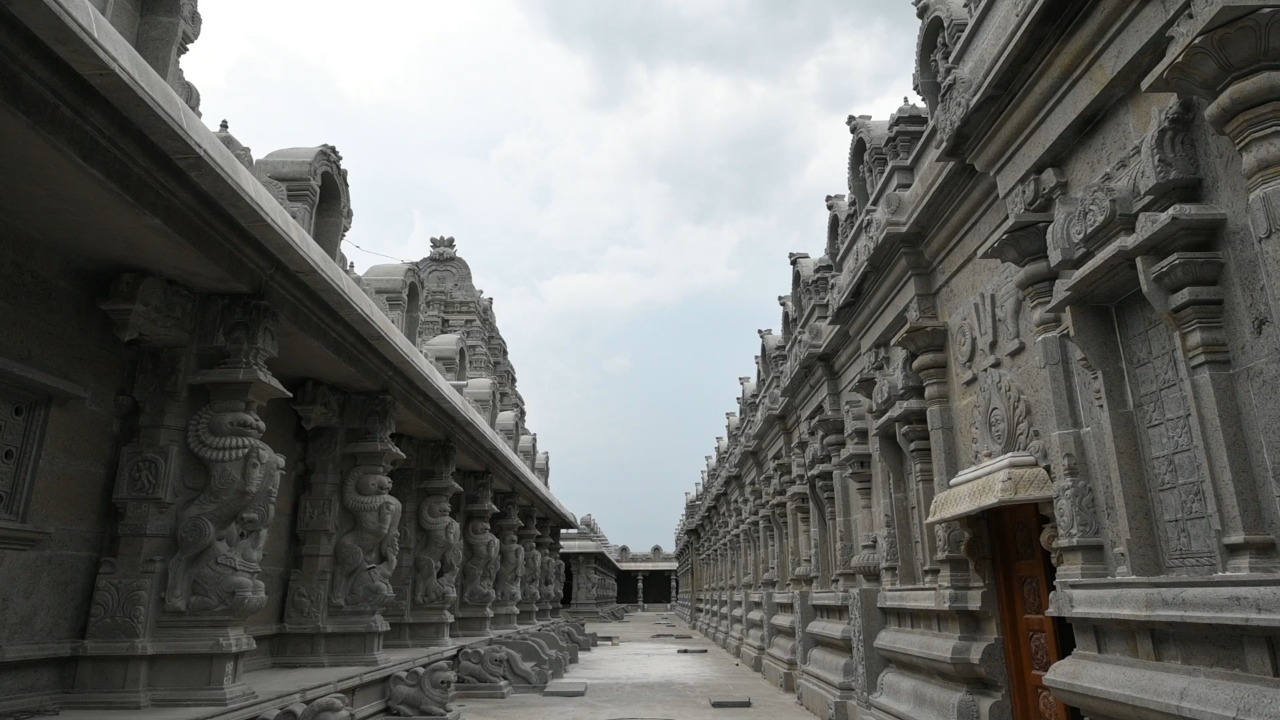 Second Prakaram (42,055 Sft) has four clusters segregated by four richly adorned ornamental stone Rajagopurams at cardinal points of East, West, North and South. It comprises a 3'-0' ' thick wall, the Prakaram area (16,523 Sft), Inner Mandapams for different rituals, and Outer mandapams that have Astabhuji Mandapams with different types of Shikarams. The inner face of the wall is proposed with different Lakshmi Narasimha Kshetrams.

The multi-storied stone “Gopuram” or the ceremonial entrance gateway, an ubiquitous structure in a South Indian temple, was a feature introduced in circa 14th c. AD in order to confer architectural status to structurally insignificant ancient shrines.
‍
Anand kept one thing in mind while designing Gopurams: A Hindu Temple should be designed to maintain its ancient aesthetics, mysticism, philosophy, design principle, components, quality, nature and comfort, and should adhere to the Vasthu Shastra.
‍
The Main Temple comprises 6 monumental Gopurams: 1 Trithala Gopuram, 4 Panchathala Raja Gopurams, and 1 Sapthathala Maha Raja Gopuram. 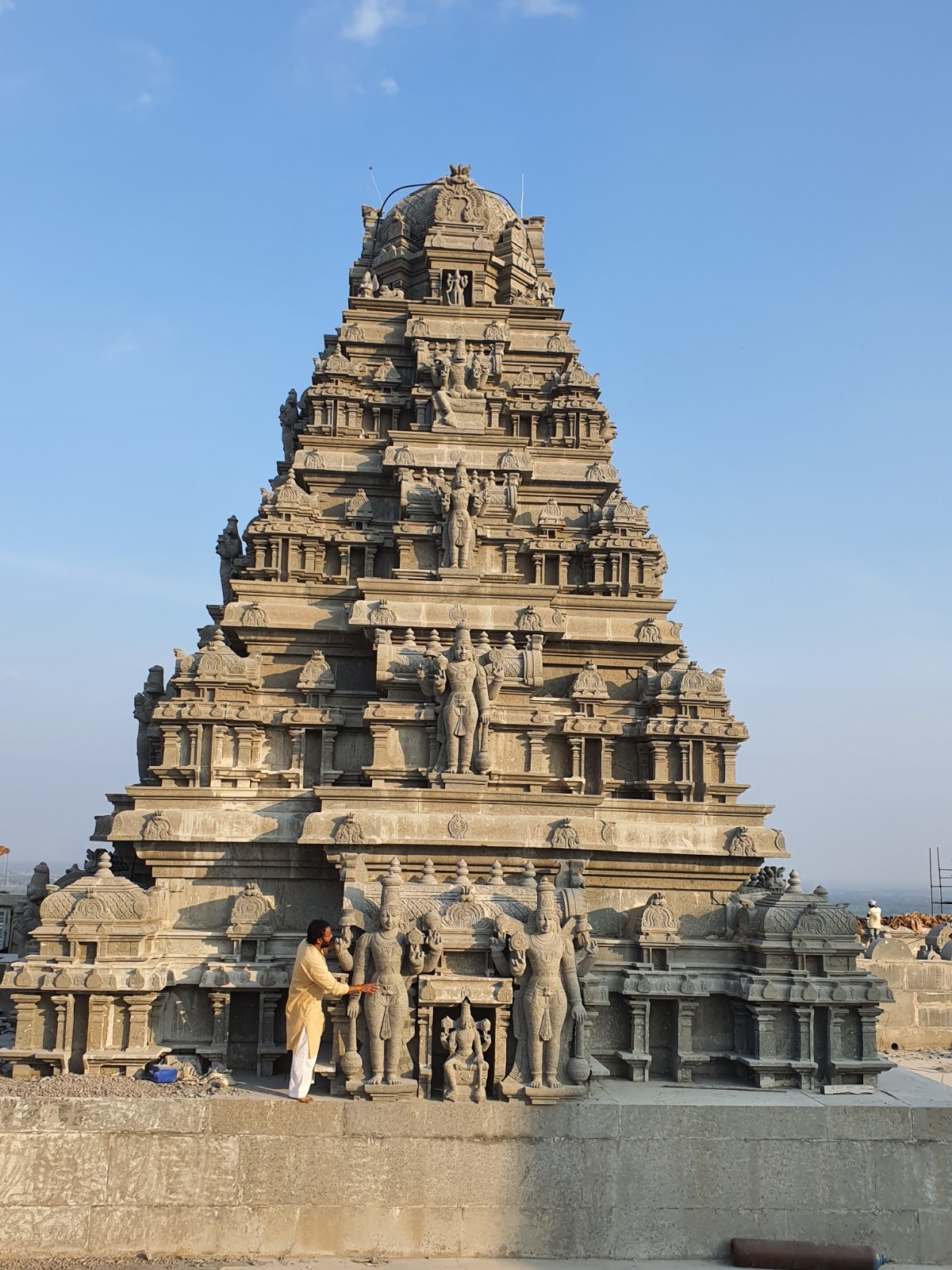 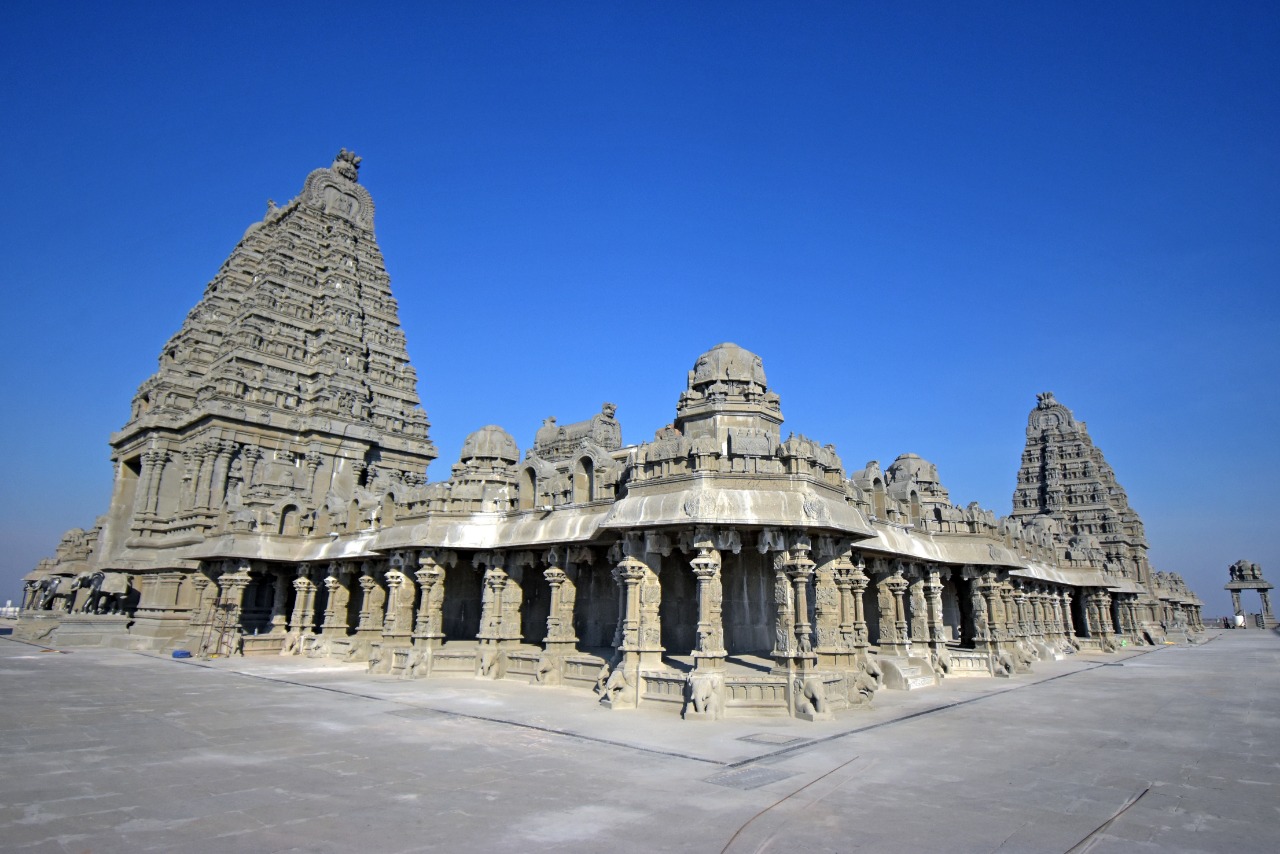 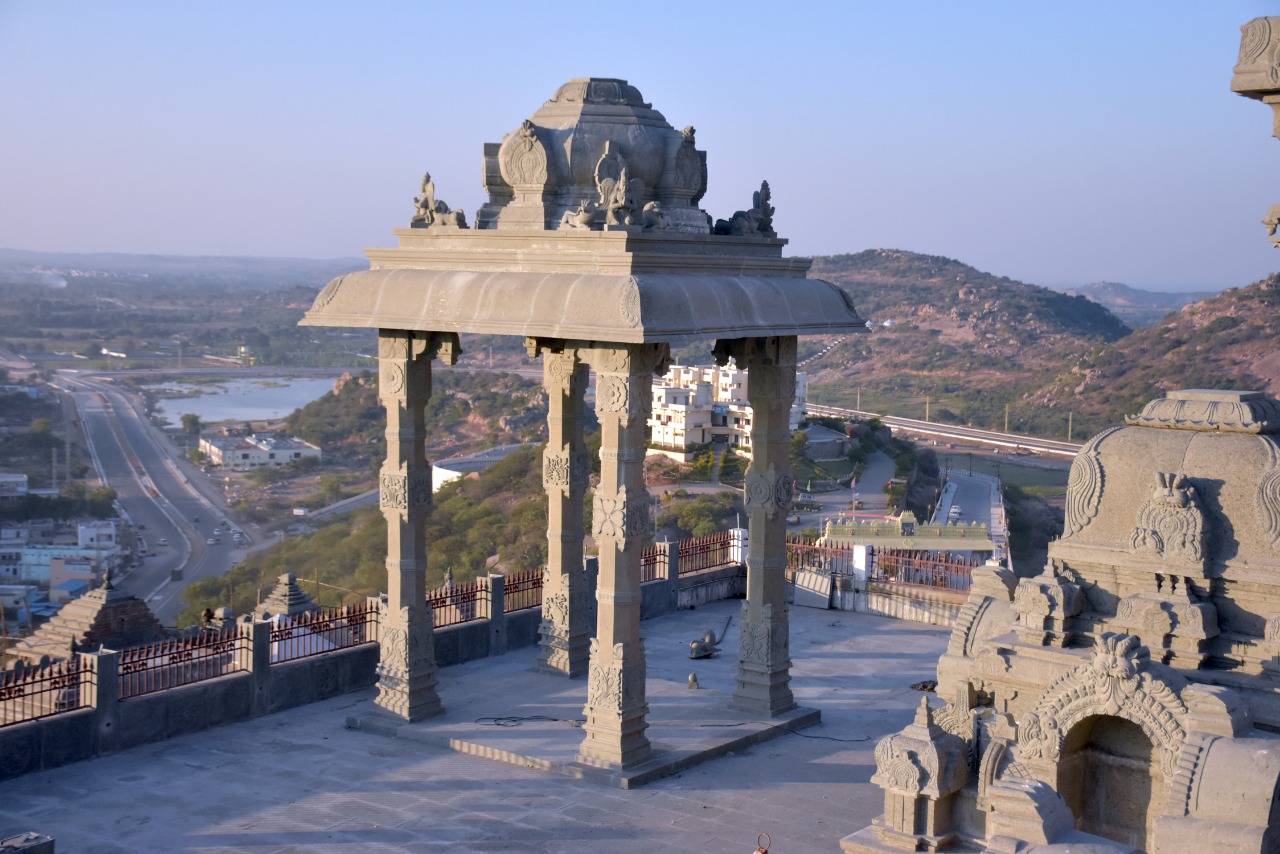 The Second Prakaram (outer mandapam) is surrounded by Madaveedhi (43,970 Sft) where the Ratham will be taken all-round the temple for Rathothsavam for different rituals during auspicious days.
‍
The Venchepu Mandapam weighs 500 Tonnes and is in front of the West Sapthathala Maha Rajagopuram exactly opposite to the main deity. At the time of Brahmothsavam the main deity is welcomed here for different rituals. It is believed that this Manadapam acts as a resting place when the lord is taken as a procession around the temple.